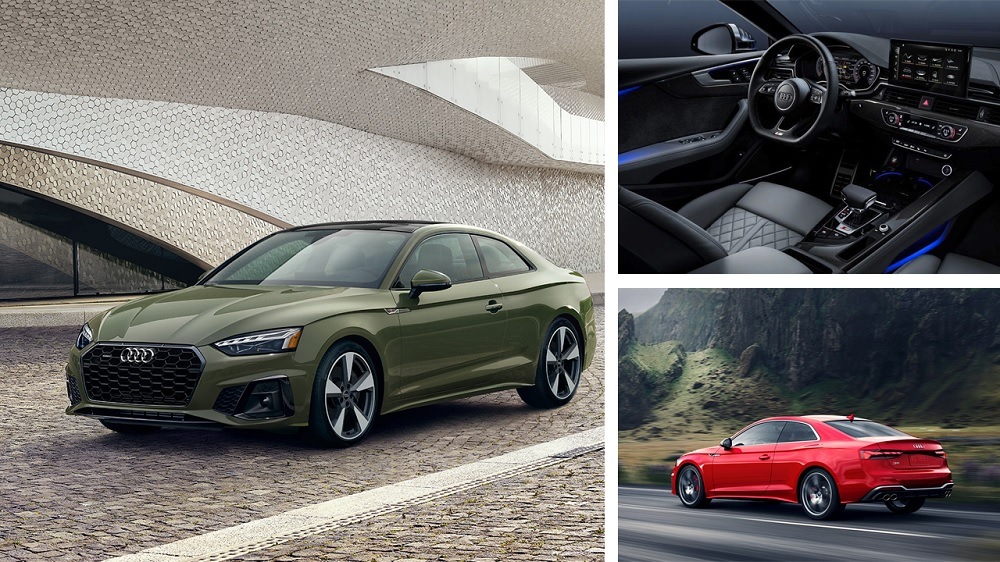 Audi’s industry-leading MMI infotainment system just got better for the 2021 Audi A5 and Audi S5 models. Called “MIB,” the newest iteration of Audi’s modular infotainment system employs 10-times faster processors than those found in current systems. Audi’s latest virtual cockpit features a 312-mm display that handles climate control and several other operations and a 256-mm touch screen that controls the MIB 3 infotainment system. Noticeable improvements include crisper displays, faster loading maps, and improved voice recognition. The updated system also lets owners customize both displays and place controls at their most intuitive positions. Haptic feedback informs users that they have indeed pressed a virtual button. It’s a nice feature that adds convenience and safety. Both touch screens also feature cell phone-like operations such as swipe (to delete), pinch and spread ( to zoom in and out), and tap (to open an item).

The MIB’s voice recognition feature adds a layer of safety and convenience to making calls, texting, and navigating while driving. The system lets drivers use voice commands to easily make calls or send texts. Navigation equipped vehicles also allow voice commands for easy destination input. Users can also get local sports, weather, and traffic information, just by asking. Along with voice controls, the system’s Handwriting Recognition feature lets drivers enter information in script using their finger. This feature simplifies navigating through the MIB’s many functions and adds a layer of safety, as well. The system audibly repeats each character back to confirm the input. If the user makes a mistake, a simple swipe from right to left deletes the error. To add Toronto to the navigation system, for example, users might draw the letters “tor.” The touchscreen would then present choices beginning with those letters and let the drivers click the appropriate selection. No more going through provinces, then cities, then streets, and so on, to enter a destination. This feature also simplifies calling as it works with other parts of the Audi MIB system. Plus, unlike voice control, users can enter touchpad input regardless of passenger chatter or radio noise.

The system’s Bluetooth feature works with almost all models of cell phones. It provides seamless hands-free calling, on-screen text messaging, and music streaming. Once paired, the Audi MIB will download the phone’s user data. Drivers will then be able to scroll through their cell phone’s contact list as well as recent calls, texts, and voicemails, right on the touchscreen. Vehicle occupants will be able to operate the system using voice commands, as well.